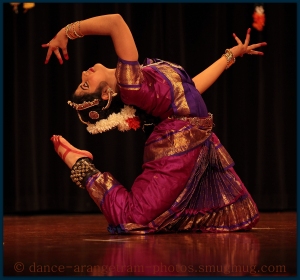 The word “arangetram” literally means “ascending the stage” and is the dancer’s first performance of a complete traditional repertoire, called a “margam”, showcasing her grasp of the three fundamental aspects of Bharatha Natyam.  The first is Nritta—pure dance with footwork that showcases different rhythmic patterns.  The second aspect is Nritya, in which a dancer renders the lyrics of a song using facial expressions and hand gestures.  In the third aspect, Natya, the dancer acts out a story by portraying various characters.  In one sense, the arangetram is a graduation, a culmination of several years of training— but in truth, it should be considered as a commencement, the beginning of a dancer’s deeper pursuit of this rich art form.